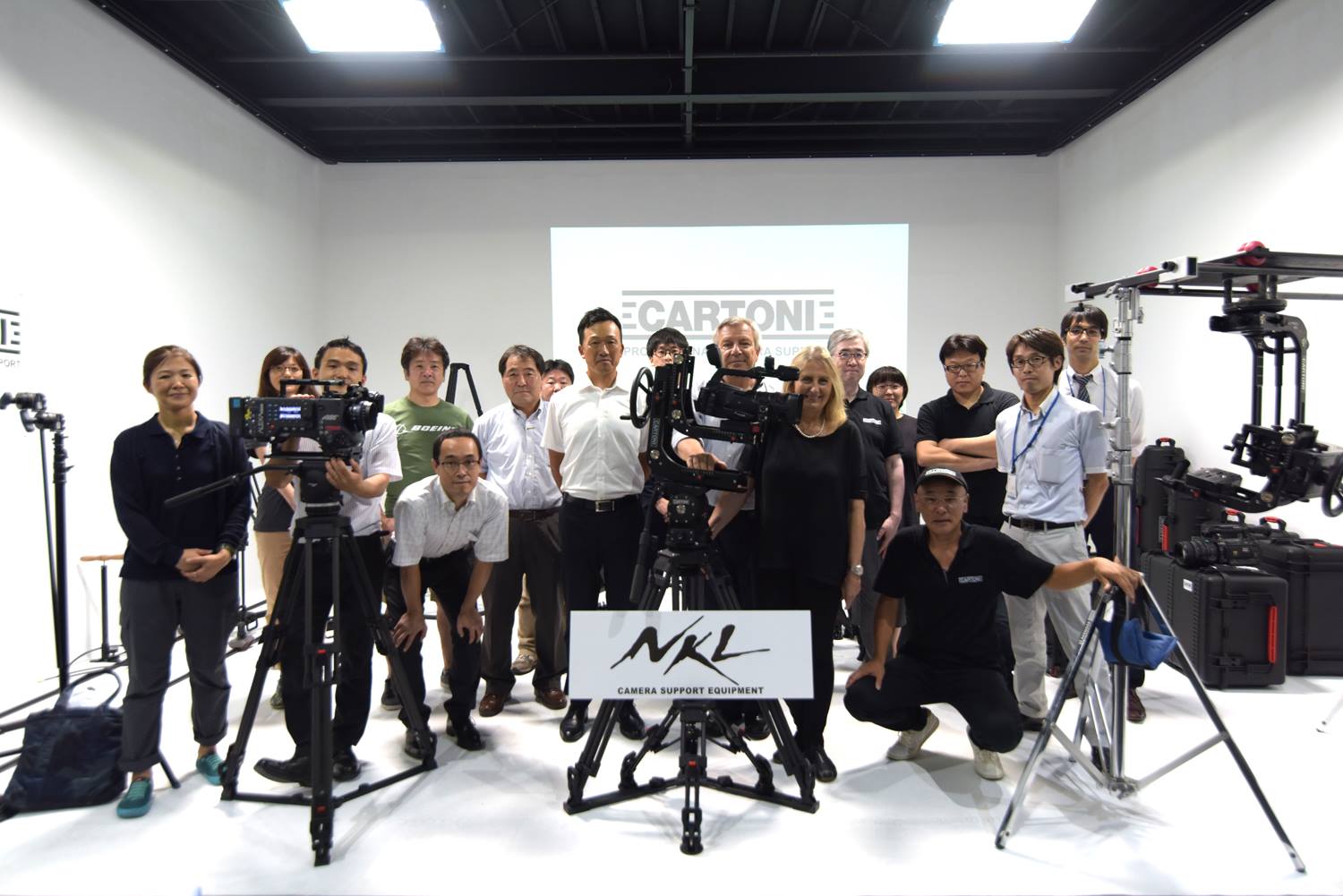 Perhaps, attracted by Italy’s notorious disorder, spontaneity, creativity, passion and last but not least, cuisine, Japanese travellers are known to enjoy visiting Italy, A change from Japan’s Kaizen philosophy commonly associated with efficiency, order and self-discipline. It is not a coincidence if the world famous electronic game of all time made by Nintendo has an Italian name: Mario.

When Japan opened its doors to Western technology in the Meiji Period (1868/1912) Italian creativity influenced facets of fine arts. The love for Italian opera encouraged the growth of a musical entity in Japan called “Japanese Opera”. Distinctly different from Kabuki plays, this artistic blend between the two countries also inspired Italian Opera and in 1904, Giacomo Puccini, premiered his opera “Madama Butterfly”, at Teatro alla La Scala in Milan.

After over a century, Cartoni, from Rome with its long and rich history of developing innovative camera support systems has come to Tokyo to present its legacy of high quality Italian design and manufacturing that helped shape the modern broadcast and cinematography industries.

Also, production companies such as Teletech, Fortune, K-5 and V-out came to see the Cartoni product line while several prominent Cinematographers as Kazushige Tanaka, Keiko Oosawa, Hiroshi Negishi and Shori Isogai, just to mention a few, “played” with the new Total Dutch Head and the Lambda 25; while the medias were represented by Eizo Shinbun and journalists from Motion Picture & TV Engineering and Uniworld magazines.

The comments received by Elisabetta Cartoni on the Master and Maxima heads, SDS systems, Pedestals, Jibs and specialty items as the new Total Dutch and Lambdas were beyond expectations. Everyone was surprised about the variety and the quality level on the Italian equipment and 30% of the visitors asked to have demo units or bought the product.

The success of this event was due to organization of the NKL staff and the experience and planning of Mr. Hiroo Hoshino, Cartoni’s Ambassador to Japan. Mr. Hoshino has top-notch industry experience for 7 years as general manager, Sales & Marketing in the US and 6 years in Europe with Asahi Optical Co. Ltd and later as president of Sachtler Japan for 6 years.

“…Customers in Japan – says Mr. Hoshino – are demanding and appreciate very much good quality products. Cartoni is known to have very good quality and to listen to their customer’s suggestions. This can be very appealing. Now, we will organize workshops and hands-on events throughout Japan. Cartoni’s excellent customer care and prompt repair service plus the 5 year warranty puts them in a better position than their direct competitors…”

To provide technical support in Japan, in 2016 Mr. Hidemasa Otokoishi, General Manager at NGC – a renowned post-production company – now also a Cartoni dealer, went to the factory in Rome along with NGC Service Engineer Mr. Hidenori Nakagaichi, for a course of instruction in fluid heads, tripods and pedestals; making it the second service station with Acebil Japan.

At InterBEE 2017, Cartoni will be on display at NGC, NKL and Acebil Japan and at the Carl Zeiss/NAC joint booth.

To follow what Federico Fellini once said “Life is a combination of magic and pasta”, later we had the privilege to be invited in the secluded village of Takao to enjoy and savor the Japanese Art of Kaiseki cuisine which is among the most highly regarded in the world, and nowhere, is Japan’s culinary prowess better demonstrated than in Kaiseki elegantly and naturally presented dishes.

Kaiseki consists of many small, tea ceremonies, but over the centuries this culinary tradition has become the pinnacle of Japanese haute cuisine. This is done not only to ensure that the true flavor of each ingredient be expressed, but also to properly display each and every one and the height of their natural beauty, while creating the perfect synergy between cuisine and artistic expression.

A feast, a heavenly moment and total synergy between Japan and Italy.

Reflecting the state of the art in camera support technology, Cartoni offers the widest product range in the industry. Over 80 years of know-how and experience, innovative solutions, patented technologies and the constant care of serving the professional in any shooting situation with any camera, make Cartoni synonymous with excellence in camera support. Cartoni currently exports from Rome, its Italian headquarters, to 65 countries in five continents, with a network serving all major international users. Cartoni’s mission is to guarantee the cameraman the highest possible reliability, freedom and creativity in any environment.