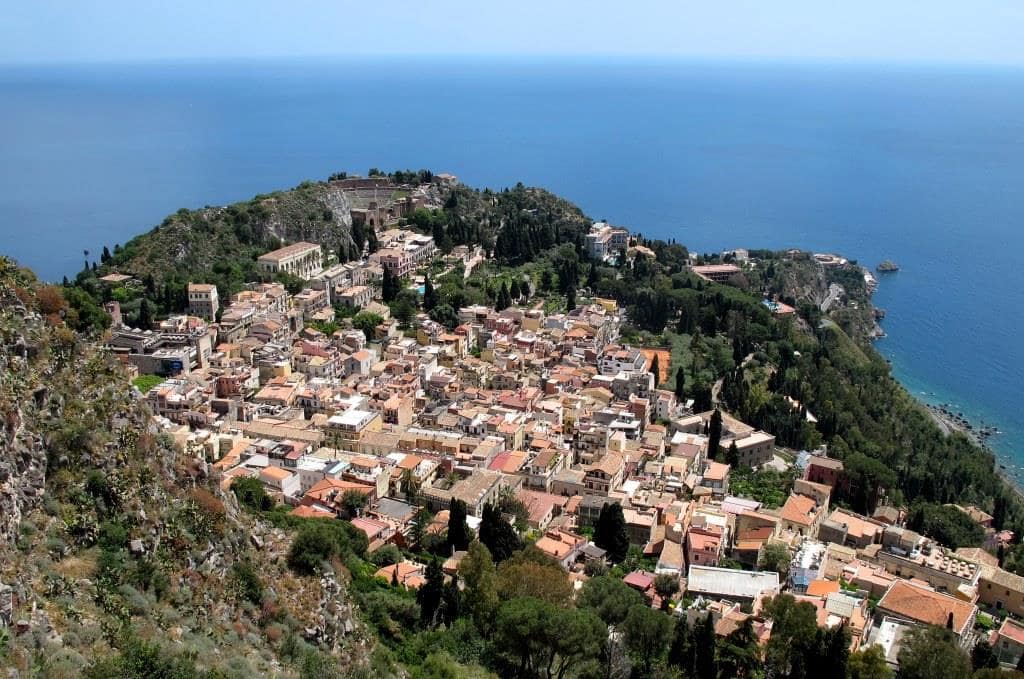 While visiting Sicily, Johann Wolfgang von Goethe said, “Man is born with a talent he has meant to use and finds his greatest happiness in using it.” This must be true, since 36 students attended the 4th edition of Terre Di Cinema International Cinematography Meetings in Forza d’Agrò, Sicily. Forza d’Agrò, is a beautiful medieval hilltop town between the Peloritani Mountains and Mount Etna, famed for its volcano, a few miles north of beautiful Taormina, whose unique appeal and timeless beauty has been consecrated in the pages of Goethe’s “Italian Journey.”

Now based between Rome and London, he works as a cinematographer from Europe to China, Africa, India, Brazil, the Middle East and South America, shooting motion pictures, commercials and television. The Festival’s main activities took place in the monumental 16th century Monastery of St. Augustine, using the picturesque colonnade for evening screenings with 100 seats. During the day, lectures and master classes were held in different facilities and a modern conference room, while technical workshops and training took place in other areas of the structure. The event is made by Cinematographers to celebrate Cinematographers worldwide, offering top quality screenings, lectures, classes, technical workshops and film gear demos. This year’s technical partners were ARRI Italia, Avid, Canon-Tav, Cartoni, K5600, Panalight, Panatronics-Zeiss, Sony and Tiffen. Cartoni, Italy’s historical Professional Camera Support brand, was the main technical partner of Terre di Cinema, and played a major role during the week dedicated to workshops.

They hosted The Tiffen International “Bronze” Steadicam Workshop. Danny Hallett flew in from Tiffen UK to instruct a selection of 11 students with the help of Cartoni’s staff. The intensive workshop was enriched by Terre di Cinema’s guest of honor, Garrett Brown, ASC, the legendary inventor of the Steadicam and Academy Sci-Tech Award winner. Garrett supervised the student’s training and held a final master class. He told FDTimes “I was gratified how far and fast Danny Hallett brought his Steadicam workshop students along. I helped out on ‘test day’ and gave my ‘moving camera’ talk and suddenly the week was over. A good experience…” Garrett said “Terre di Cinema was very well done. I was impressed by Vincenzo’s vision and the students’ commitment. Serious and professional, but conducted with improvisatory panache and a pleasingly casual, very Italian degree of intensity. Ellen and I enjoyed every minute—particularly the dinners!” And about food, Garrett said, “Vincenzo took us all out the first night to dinner at “Il Cenacolo” in Forza D’Agrò, and the food was superb.

The next day we shamelessly hung around, hoping to return, but he brought us to a different restaurant each night, starting with the trattoria “Anni 60,” and they were all terrific. That little town must be a culinary phenomenon. We learned later that people come from miles around to dine ‘on the mountain.’” The other workshops focused on digital workflow and the role of the DIT—with extensive testing of the cameras provided by the technical partners: ARRI Alexa M (Arri Italia), Sony F5 (Sony Europe), Canon C500 equipped with an Odyssey 7Q Raw recorder and OLED Monitor for 4K shooting and storage (Tav). The lenses at the students’ disposal were Canon Cinema EOS (Tav), the ZEISS CP.2 Primes (Milan-based Panatronics, Italy’s exclusive for Carl Zeiss), the Angenieux Optimo Zoom lenses (Cartoni) and a set of ARRI-ZEISS Superspeed PL primes (Panalight). All camera fluid heads, tripods, accessories and equipment were supplied by Cartoni: Master MK II, Jibo, Smart Head and Pilot and Zephyr Steadicam Rigs from Tiffen UK. The lights came from K5600 Lighting and the grip equipment came from Cinematografica Light Service, a Sicily based cinema rental service.

A novelty this year was a special two day exhibit in Taormina for the Sicilian DPs, operators, film and television industry members, sponsored by the technical partners to show their latest gear. The Showcase was organized in partnership with the Premio Nastri d’Argento (Silver Ribbon film Awards). Garrett Brown ASC, was the special guest of the award ceremony held at the Ancient Greek Theatre of Taormina. Brown was asked to hand off the Silver Ribbon award for best Cinematography. Garret said, “it would go to Daniele Ciprì for his work on ‘Salvo’ and his silver-haired self had been pointed out to me at an earlier press conference; but at the instant of the hand-off on stage, amid a flood of Italian prompting from host Laura Delli Colli, that person remained seated in the front row and another shaggier, dark haired gent appeared beside me with his hands out for the award and the crowd began to laugh, so I gave it to him, and shook his hand, and all was well.” While cinematography and editing students were busy with the technical workshops, the directing students attended an intensive story development seminar accompanied by an acting workshop with 8 professional actors from different cities in Italy, who ultimately featured in the short films shot during the second week of the CineCampus.

At the Terre di Cinema 2014 closing gala soirée, the 13 shorts were screened to the public. In the following months the short films will be presented in several international festivals, starting with the 30th Edition of the Brest European Short Films Festival in November. The Student’s jury appointed the 2014 New Cinematographers Award to Greek Cinematographer Olympia Mytilinaiou, GSC for her remarkable work on the feature film Miss Violence, winner of a Silver Lion at the 2013 Venice International Film Festival. K5600 Lighting awarded the winner with a Kit Combo Evolution including 2 new HMIs: one Alpha 200W and one Joker bug 200W with accessories. The Festival had a variety of screenings divided into categories. Masters of Light was a tribute to great cinematographers and camera operators who have left an important mark in the history of cinema. Focus On: a retrospect dedicated to a single country in the world cinema panorama—Serbia was the 2014 selection. Italian New Waves: a selection of the most interesting debuts of the Italian scene of the last season. The Brest@Terredicinema: a selection of the best short films from the 2013 edition of the prestigious Brest European Short Films Festival. Cinecampus Corti: the short films shot during the past editions of the Terre di Cinema. For more in-depth info on the Festival master classes, participants, videos, screenings and updates on Terre Di Cinema – Festival And International Meetings On Cinematography: www.terredicinema.com www.vincenzocondorelli.com