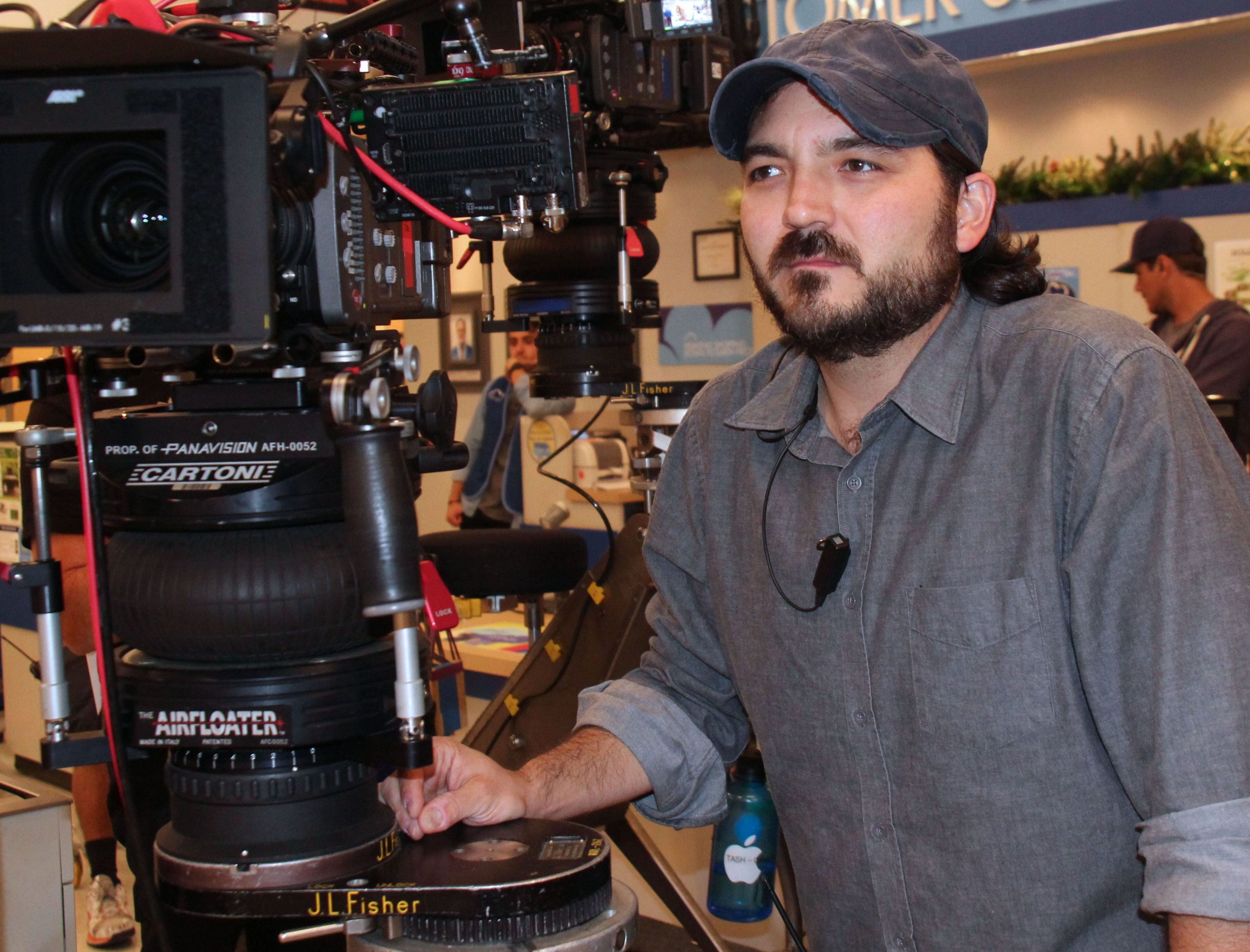 Jay Hunter is a celebrated director and cinematographer whose work runs the gamut from features and scripted series to documentaries and reality TV. A true innovator, he has crafted unique aesthetics for television shows such as On the Lot and films including Joss Whedon’s Much Ado About Nothing. Jay’s current project is the NBC comedy Superstore, about the employees of a big box retailer. For that series, he makes viewers feel like they’re part of the action through a visual style that looks handheld, but is not. Jay’s camera operators work with camera support systems that include CARTONI’s Airfloater. The patented head perfectly simulates handheld camera movement, while relieving operators of the burden of holding heavy camera systems on their shoulders.

Jay Hunter recently spoke with CARTONI USA about his career, Superstore and the CARTONI Airfloater.

CARTONI USA – How did you get your start?

Jay Hunter – I went to college at the University of Colorado at Boulder. I went to school to be a film critic and so I thought I’d take a filmmaking class. I fell in love with it. I had a background in photography, so I gravitated toward cinematography. No one in the program was very good at shooting, but I was the best of the worst, so I became the cinematographer for our graduating class. I was lucky enough to get an opportunity to shoot a couple of low budget features while I was still in school and got to work early on. I bounced between being the DP on small stuff and operating on bigger productions. I was in the trenches, paying dues. Years past, I went from operator to DP and now I have an awesome job at Universal onSuperstore. It’s a fun, way cool job and ten minutes from home. I feel like I won the lottery.

CUSA – You’ve done features, documentaries, reality TV and now a sit-com. What do you like about each genre? How do they differ?

JH – I started doing scripted work, features, commercials, and a little TV. That’s my roots. When I moved to L.A., I was operating and fell into reality TV. I wasn’t always jazzed about the subject matter, but I was a young guy and I learned a lot. I treated each job like I was shooting a movie, and because of that, my work stood out. I got a reputation and began to work with Mark Burnett Productions. He was doing the most high-end cinematic work in reality. It was a way to gain film experience without shooting a film. When I moved back into the scripted world, I brought with me the lessons I’d learned about lighting, camera operating and blocking. For me, it’s all part of the same cinematic world and telling stories. I wouldn’t be the cinematographer I am today without the skills I developed in non-fiction.

CUSA– Is Superstore a good example of that? It seems to employ some reality TV techniques.

JH – Reality TV helped bring handheld camerawork back into vogue and made documentary verite a hot look. But, I think it’s come full circle and that aesthetic is now blah. Superstore is a tangent, a new variation on that look. Almost everything we do has a handheld feel, but what we do differently is use extremely long lenses, often an 85mm lens. Most shows use 21mm or 25mm lenses for wide shots, and save the 85mm for close-ups. We go deep into the tele-photo world. We put our cameras far away from the action and use out of focus texture in the fore- and mid-ground. It’s more observational. It walks a thin line. We don’t want it to be like a stalker in the bushes. It’s more like you’re another shopper in the store, watching from a couple of aisles away. It’s like things are happening around the audience and they become another character in the story, witnessing it from afar.

CUSA – How do you use Airfloater on the show?

JH – The show feels handheld, but 98 percent is shot with the Airfloater head. People who arrive on the set are surprised when they see them, because they assume we shoot over-the-shoulder. The Airfloater gives us the look we want without requiring the operators to have cameras on their shoulders all day. As a result, they’re not going to the chiropractor and they don’t want to quit the show. They walk around all day with smiles on their faces.

CUSA – Does it really make that big of a difference?

JH– You can survive a 30-day shoot working handheld, but a TV show goes for months and months. It’s very hard on the operators. I’ve been an operator. I’ve been in their shoes and I want to be sure that they are comfortable and happy. The Airfloater is the most essential piece of gear we have on the show. I don’t know what we’d do without it.

CUSA – How does it help the operator?

JH – The telephoto lenses we use are heavy and they make the camera out of balance. Operating a camera with a telephoto lens handheld can be brutal on an operator’s body. We also ask them to keep it steady. If they have the camera on their shoulders, their bodies are tense; they need to maintain a certain pattern of breathing. In the old days, you might roll through a whole mag of film. Today, it’s not uncommon for a director to roll for 20 or 30 minutes. If you are operating for that long and not moving, your body starts to cramp. Work a 12-hour day like that and when you go home, you roll over and die.

JH – When we bring in day players and they find out it’s a handheld show, they think, “Oh god, it’s going to be rough.” But when they see how we execute, their eyes light up. They ask if they can get more days.

CUSA – How did you discover Airfloater?

JH – I saw it at NAB six or eight years ago. I saw if from a distance and immediately got the concept. I wondered why no one had thought of it before.

CUSA – Would you recommend it to others?

JH – If you’re doing a show that requires handheld camerawork, you need the Airfloater. You can get the handheld vibe, you can use any lens and you can shoot for a long as you want without putting the camera down. On top of it, your crew can perform any task and won’t be worn down at the end of the day. They’ll get up the next morning, fresh and ready to do it again.