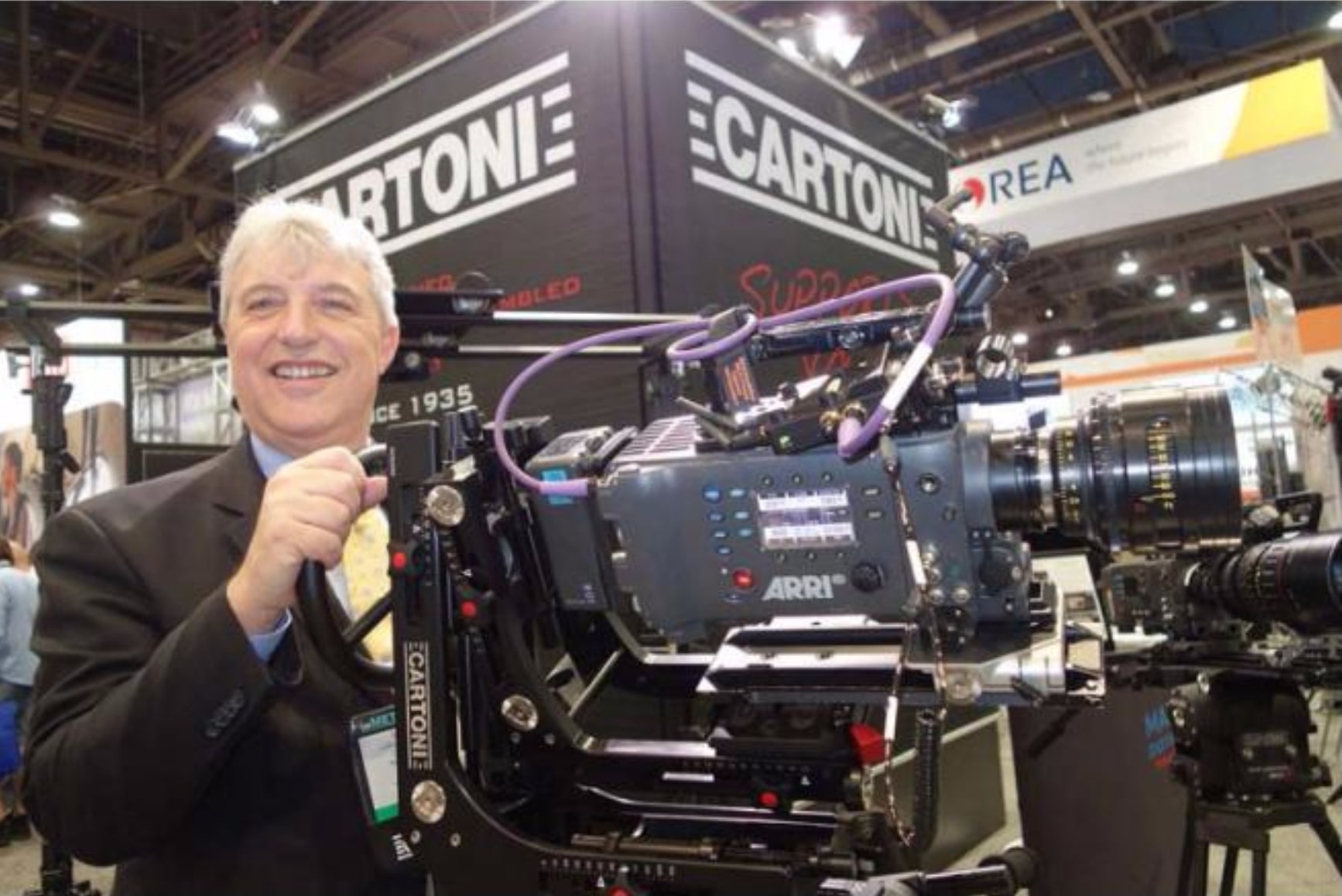 We are here at CARTONI with Luciano Belluzzo and Giles Coverdale from Gencom.

ED – Luciano, we heard from CARTONI at IBC about the rationalisation of the product lines which is, honestly, a sensible move because who needs that many tripods – now?

Luciano – Well let me tell you first that the ENG and EFP range of the Focus line now has been settled from the 8 kilo, 12 kilo, 18 kilo, 22 kilo – I’m proud to tell you that two months ago we got the first order from BBC for 30 Focus 22 tripods. This confirms that the line has been accepted by the market. Now we are concentrating on the 30 kilo and above – bigger heads, and at NAB, we are launching the Master 65 head. The Master 65 head will replace the Omega, so we are talking about heads for OB vans and studio big heads. The Master 65 is a completely different new product, with a new fluid mechanism and the Master 65 will be the head from which we will modify all future big OB van and studio heads from CARTONI.
And also this year we are launching a lot of products with cine applications – the cine digital market, which will extend CARTONI’s presence into this area as well.

ED – Now just looking at the Focus range and one thing I immediately notice is this little side handle that I have not seen on any other tripod?

Luciano – Well on this range, we have also decided to make new investments on new products on the legs. We are revamping and relaunching the famous Smart Stop tripod, just to give let’s say, a better aesthetic. We are hoping that all the Smart Stop tripods will have 100% the handle included. We are also offering the special new Smart Spreader which is totally different from all the others, which will allow the cameraman to make it very quick to collapse the legs and to go away to another shooting location. This is of course connected to the Focus range. So now we have the Focus range already established and the new range of tripods both in carbon fibre and in aluminium, the new Smart Stop range, the SDS.

ED – So it’s a new name, SDS – Smart Deployment Series – and I particularly like the little red button there on the spreader that, with one press, the spreader arm slides out and then you let it go and it locks?

Luciano – You see the spreader, with locks like that you can remove it very easily. The handle, this red lock which gives us, let’s say, a sort of aesthetic just to make it a little bit different. You know we are Italians, Italy is the country of the fashion and we have to keep on that.

ED – Well red and black is a good colour combination.

Luciano – I agree with you, exactly. So this is something we are working on now, because in our heads we have also to revamp the tripod range. We have so many tripods, when the market requires only standard tripods, but easy to handle, so the SDS system, the Smart Stop and the spreader will give us a boost in sales also in the tripod as well, so in ENG and EFP.

ED – And if you want it, you’ve also got the base spreaders?

Luciano – Absolutely. You can have the ground spreader as you like it.

Giles – One or two other new products now too, you’ve got the new head, the Master 65.

Luciano – The Master 65 is a 65 kilo OB van and studio head. This is not the top; the top is the Magnum up to 90 kilo. The major thing for us, and for our dealer partners, is it’s around 2000 euros cheaper than other competitors and allows us to be more competitive, always including five years warranty on the head. It can be installed on tripods or it can be installed on pedestals as well. So it’s a brand new head, the mechanism is completely new; it’s something which we are going to use, the new mechanism, also for future CARTONI heads, always in the broadcasting heavy duty tripods.

Ed – Smart Lock has been around for some time, but it’s obviously a key factor in choosing a head?

Luciano – Exactly, well the Smart Stop is something that has around 10 years life. We decided to revamp it because we do believe that this product has a lot of features which have to be explained and displayed to customers. It was our mistake, we didn’t push too much. Now with this new appearance, with this new spreader, with the fact that this has a handle, we wanted to have a specific marketing approach, totally different thanks to our dealers in the world.

Luciano – You know the very beginning of CARTONI was in the cine business, so this year the Cartoni family, Elisabetta and Beatrice , invested a lot of money in developing new cine heads. We have developed the MAXIMA 30 which is a 30 kilo head in competition against O’ Connor 2065 and it is absolutely highly performing, but also we have developed the Lambda 25 which is a nodal head and from the development on the Lambda 25, we have developed the Total Dutch. The Total Dutch is a special head which allows you 360 degrees rotation and 360 degrees revolution, so you can really move the head in each part of the image. You can shoot everywhere and the advantage is that you can use this head – unfortunately not only on your CARTONI heads, but on all competitors’ heads. The Total Dutch is something which has immediate potential all over the world and it will allow CARTONI to be recognised in the cine industry as one of the main technical players in the world. The Total Dutch allows you to even go up to one centimetre high from the pavement, especially for commercials, when they need you to shoot some special things really on the pavement surface, you can go there up to one centimetre high. It’s unbelievable, it’s really unbelievable.

Ed– And it’s a beautiful piece of engineering as one would expect from an Italian company?

Luciano – It’s a beautiful piece of engineering, as you’ve just said. That’s where everything started – this is the Lambda 25; from the Lambda 25 we developed the Total Dutch and we call it the Dutch axis. It’s crazy.