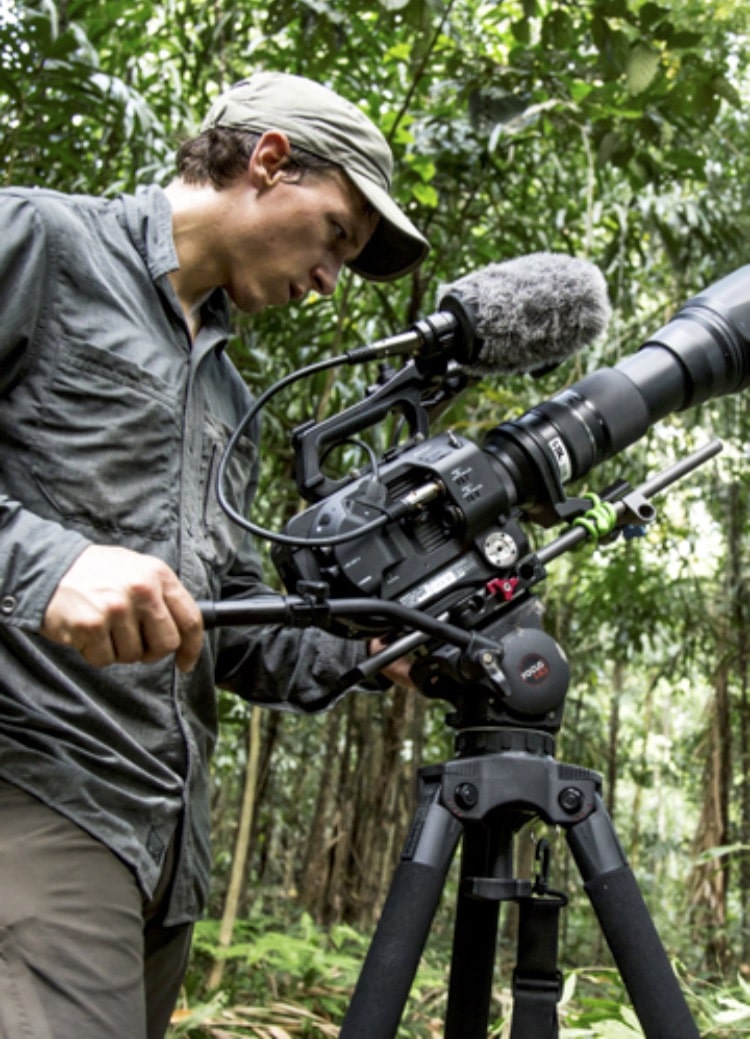 “Working in the jungle, it’s important to have gear you trust will function time and time again,” Schmidt says, “even in gnarly conditions when you’re breaking it down and setting it up 20 times a day.”
Schmidt used FOCUS HD in tandem with Cartoni’s Stabilo tripod to support a Sony F7 camera and an assortment of long lenses. “FOCUS has a 100mm ball head which translates into bigger payloads,” he explains. “That’s important to me as I work with a pretty big camera and bigger lenses. FOCUS provides the solid, smooth performance you’d expect from a bigger, more expensive head.”
Cartoni has just introduced four new additions to its FOCUS line—FOCUS 8, FOCUS 12, FOCUS 18 and FOCUS 22—designed for today’s ultra-light, high performance cameras. Supporting packages from 0 – 22kg, they are aimed at independent producers, ENG operators and documentarians like Schmidt. “Cartoni gear allows me move to move quickly and work quietly,” Schmidt notes. “I like that.”

Schmidt and camera operator Federico Pardo had just eight days to locate the rare albino spider monkeys (their albinism is a genetic abnormality cause by habitat degradation), record their story and capture the fragile environment in which they live. Their task was complicated by the sweltering jungle environment, omnivorous insects and the fact that just two of the monkeys were known to exist. “As luck would have it, we were able to film these incredible ghosts of the forest for several hours,” recalls Schmidt. “They ate, they wrestled, they stared down at us with big, curious eyes from the top of the canopy. It’s incredible to see these giant, white figures in treetops, flying through the branches with their prehensile tails.”
“Shooting these extremely rare albino monkeys in the Colombian jungle was an incredible experience,” he adds. “I hope this story brings attention to the plight of tropical forests in the face of rampant resource development.”
About Manios Digital & Film
A division of Ste-Man, Inc. and led by President Steven Manios, Jr.,  Manios Digital & Film has been bringing the world’s highest quality products to professional filmmakers, videographers and ENG crews in the United States since 1992. The company has longstanding relationships with leading manufacturers around the globe and an extensive dealer network spanning the United States. It is an authorized distributor for Cartoni, Vocas and Kinotehnik. By working closely with its customers, and by listening to and understanding their needs, Manios Digital & Film has become a trusted partner to film and video professionals worldwide.