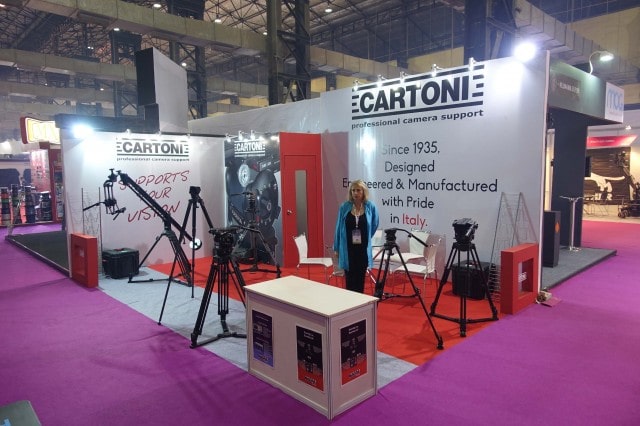 “Cinema in India is like brushing your teeth in the morning. You can’t escape it,” says Bollywood superstar Shahrukh Khan. (Brush with bottled water or beer.) Mr. Khan is right, considering the vast number of people who flocked to Broadcast India 2014 at the Bombay Convention Centre in Goregaon on October 15th to 17th. The show had around 20,000 visitors – as in 2013 – making it again one of the most well-attended and successful Broadcast India shows to date.
This is India’s major exhibition dedicated to the entertainment and broadcast industries, showcasing the world’s leading companies with their latest technologies for Digital Cinema, shooting, broadcast, cameras, camera supports, lights, audio and mobile television
This year there were a few new entries to the usual suspects of foreign exhibitors coming to Bombay. Atomos presented their latest Shogun in a huge booth run by Leigh Hardingham and a group of local enthusiasts. Next to them were GoPro and RED. The new associationAFFECT – Association des Fabricants Français d’Equipments Cinématographiques de Tournage – (French association of film equipment manufacturers) was helmed by Aaton Digital/Transvideo’s Jacques Delacoux in partnership with Thales Angénieux and K5600. Highlight at the Aaton Digital booth was the Cantar X3, which recently won a Cinec Award. The new Angenieux anamorphic Optimos were enthusiastically presented by Jean-Yves Le Poulain.
Traditional international Broadcast India exhibitors that have always believed in the Indian market were: Cooke, Cartoni, cmotion, Ronford-Baker, Bright Tangerine, ZEISS, Tiffen/Steadicam, Bebob, Panther and Lee Filters, flanked the other big brands: ARRI, Canon, Sony, Panasonic, Blackmagic, AJA, RED, etc.
Geoffrey Chappell, Director of Sales for Asia and the Middle-East at Cooke Optics, said “In a way, better than last year, maybe fewer visitors but more professional.”
Robin Thwaites, Tiffen’s International Director of Sales for Steadicam was happy about the quality of the visitors. “Broadcast India is always a good show for Tiffen and we hope to have an in-depth presentation and a workshop soon.”
Stephen Chappell, Sales Manager at cmotion, said: “2014 was the 10h consecutive year for cmotion and we are looking forward to 2015…”
Elisabetta Cartoni, Managing Director & CEO at Cartoni was not dissapointed. “For the contacts and sales to the Bollywood Film Industry… which now appreciates the price and technical competiveness of Cartoni’s Fluid Heads, in particular the Maxima and Master Mk2.”
Even considering Kavita Meer’s efforts (Director Saicom Trade Fairs) to improve Broadcast India, the 2014 edition had no structural improvements from last year’s new air conditioned VIP lounge, better services and food courts. Foreign exhibitors still had to face the humongous dust problem and lack of air conditioning during set-up. Hard for these exhibitors to set-up their booths – wearing masks – to cope with 80/90% humidity, clouds of dust and sticky weather – Anyway, that’s part of the “Incredible India” payoff syndrome.
The 2015 edition will be held from the 15th to the 17th of October at the Bombay Exhibition Center (Goregaon). For any inquiries, go to: www.broadcastindiashow.com